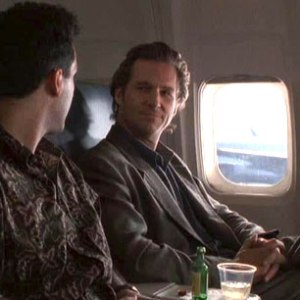 After a previous blog post, Why Jeff Bridges is Responsible for My Fear of Flying, in which I may have given the slight impression that the actor of that name is the reason why I am somewhat jittery whenever I am forced to get on an airplane, I received quite a substantial number of communications from people offering me lessons in overcoming this “irrational” fear.

Now, irrational fear is just that, irrational. To my mind, there is nothing irrational about the fear that several tons of heavy metal being held in the sky by pure momentum may, with very little prompting, suddenly cease to remain in the sky. And the added component of that fear, that the subsequent transferal of this heavy metal object from sky to ground is likely to be a harrowing experience for anyone inside, or indeed in its way, as it hurtles inexorably downwards, also seems to me to be quite reasonable.

In truth, to call what I have a fear of flying is misleading. The flying bit is great. When I get on an airplane, flying is exactly what I am hoping it will do. What I am afraid of is that gravity will have a good look at the airplane as if endeavors to push its way into the atmosphere and point out, with a gentle tap on the fuselage, that large heavy objects are supposed to go down, not up. It is not the flying I am afraid of, but the crashing.

“Ahah,” the anti-phobics say, when I politely repel their offers to overcome my fear of flying with a variety of solutions that have variously included hypnotherapy, counseling, Benadryl, gin, and chocolate, “but far fewer people die on airplanes each year than are killed in car crashes, fall of cliffs, or eaten by giant worms.”

As a strategy to help people to overcome fear, quoting statistics about other potential threats always seems to me to be counterproductive, but it is what people invariably do. All that such statements achieve is to add to my fear of flying a fear of driving in cars, taking cliff side walks, or visiting giant worm emporiums.

So thanks for the offers, but I do not wish to spend 450 dollars or euros on a course of five lessons to overcome what I perceive to be quite a rational response to the laws of physics. I will continue to drag myself onto airplanes, making sure that I have written a will beforehand, sending any last messages I have for people I know before frantically switching everything to airplane mode as soon as the Switch off Laptops light comes on, compulsively checking for the position of the emergency exits and gauging the number of steps it will take to get to them in the blind and smoky panic of one of the innumerable plane crash scenarios that play out in my head.

No, this fear is not irrational at all.

In the next couple of days, I will be boarding an airplane for the first time in about seven years. This delay has been completely intentional.

Oh, I’ve used a lot of excuses: pregnancy, my smallest son being too small to enjoy the flight, lack of money, isn’t Ireland just gorgeous in the summer, won’t a week in Kerry be just as nice as Spain (it isn’t: not when its drizzling, grey and 10 degrees). That kind of excuse.

They were nonsense. The truth is, and I have mentioned this elsewhere, I am terrified of flying. What I have not mentioned is that it is all Jeff Bridges’ fault.

Years ago, I flew frequently and with blithe disregard for any potential consequences rather than the obvious one of getting where I was going, I flew to England, America, Germany, Spain, France, Austria, without giving it a second thought. I descended on Glasgow once in a minute plane called a Focher that bounced around like a toy being waved about by a small and somewhat boisterous child. I didn’t, as they say, turn a hair.

Now, thanks to the film Fearless, I am filled with panic at the mere thought of flying. Even as I write, my stomach feels as if it is full of snakes.

Let’s be fair to Jeff Bridges. He didn’t make Fearless. Peter Weir was the director, but Peter Weir is not the person who features in my imagination every time I even think of getting on a plane.

In Fearless, Jeff Bridges is traumatized by a plane crash, and spends much of the film trying to overcome that trauma, most notably by getting into a car with Rosie Perez and driving into a wall.

With all due regard for the substantial talents of Jeff Bridges and Peter Weir (who directed The Truman Show, one of my all-time favourite films), Fearless is not a particularly good film. But, its depiction of the plane crash scared me witless.

The most frightening bit, the bit that flashes into my mind whenever I even consider leaving the country, is the bit with Q. Or rather, John de Lancie, the guy who acts Q in Star Trek: The Next Generation. Not to spoil the surprise for anyone who hasn’t seen Fearless, Q (sorry, John de Lancie) is sitting beside Jeff Bridges when the plane goes belly up; but where Jeff Bridges somehow survives, Q loses his head. Graphically. Chillingly. Horribly.

What I see, whenever I think of being in a plane, is Jeff Bridges, sitting beside a headless John de Lancie.

This is why I cannot fly. Or at least, not without the help of some serious sedative, which I will look up on the Internet as soon as I finish writing this (only joking).

But I am going to Sweden, because my brother lives there, and even if he didn’t live a plane journey away, I would be getting on an airplane this year. The world is a big and fascinating place, and I have run out of excuses not to visit it. I cannot show my fear, either, that wouldn’t be fair on my children, who have never seen Fearless and hopefully never will.

Meet Me on Goodreads